If I had managed to make the reunion (see the last post) the pic below could have been an update of this one. (l-r) Terrell, Janie, Mike.
Posted by Terrell at 12:10 AM No comments: 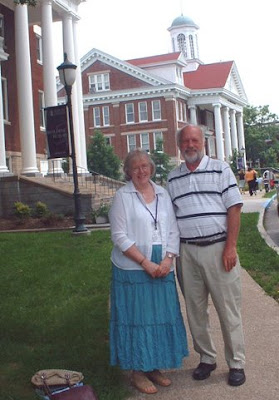 Here is Janie and me. I spent most of the reunion visiting with Janie. I haven't seen her in 35 years. She drove to Asbury from New Jersey with her husband, Charlie. I enjoyed visiting with them both. Charlie seems like a great guy. Janie has three children, the youngest is 30 years old, all married. She has a number of grandchildren. She home schooled all of her kids through high school. She teaches English in an inner city Middle School. (In my book, that qualifies her for sainthood.) Janie says her Mom is doing well, that she still lives in Elmer in the same house and is 94 years old. Janie lives only 7 miles away from her Mom. 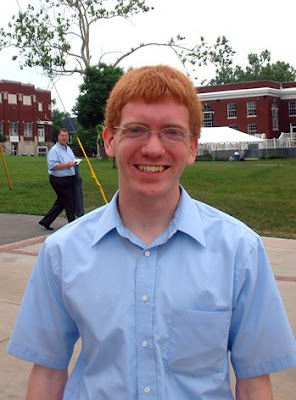 Sunday morning was a concert of a reunion of alumni of the Asbury Men's Glee Club. The director said that over 700 former glee club members were invited, about 65 or so showed up and did a great job. I'm going to order the CD. I was particularly moved by their rendition of "I'm On My Journey Home." I wish I had taken my movie camera to you-tube the last number -- "I'm Gonna Ride In The Chariot In The Morning, Lord." I was surprised when one of the soloists turned out to be Ben: "Are you ready, my brother, are you ready for the journey?" I hadn't noticed him until his solo part and then it took me a second to place him. What a great voice. I caught up with him afterward, outside of Hughes. (This reunion included a nice tent -- seen in the background.) 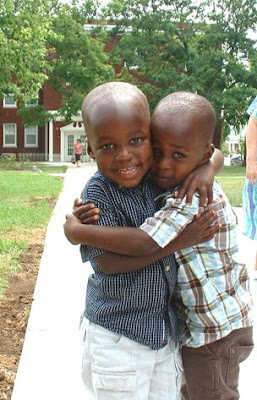 These two twin brothers (not identical), three year olds, are from Kenya and were adopted by Asbury missionaries who are working with orphans in that country. Their adopted parents received a special award from Asbury which included a gift of $1000. When I found out that their names are Soloman and Gifta, I had to take their picture. I asked which was Soloman and was told the one, of course, with the bigger head (on the left in the picture). They were running about and when I asked if I could take their picture, their parents spoke to them in Swahili and then they started to hug each other. I missed seeing some of the grandchildren of our Kenya college friend, Soloman. Some of Soloman's children and grandchildren, I was told, had been at Asbury the previous day. 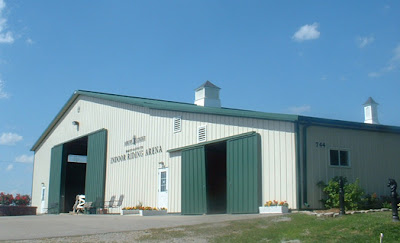 I went with Skip and Darlene to Asbury's equine center. Very impressive. First time I've seen it. Asbury now owns over 60 horses, all donated, and over 70 Asbury students are involved in the program. Asbury offers a major in this field. I was surprised to learn that all but a few of the students in the program are girls. Students can now sign up for horse classes to fulfill one of their PE credits. One aspect of the program is to train horses for use by policeman. Students may now bring their horse to Asbury and board the horse at the equine center, and this opportunity is helping recruit some students to Asbury. 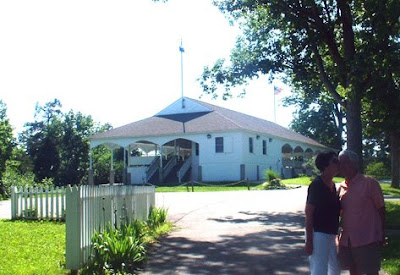 We also went to High Bridge where there in now a pavilion and museum. I didn't realize that High Bridge has such a rich history -- the site of many speeches, rallies and religious revivals. William Jennings Bryan spoke there as did Billy Sunday and Rutherford B Hayes. It became a resort area where many people came holiday excursions by train and boat. At one time 272 steps led to the river itself -- but were destroyed accidentally by fire in 1948. This pavilion tries to recreate the building that was there at the time and is now available for use by groups. It was used by the Asbury reunion group earlier in the week before I arrived on Saturday.

I was very impressed that Asbury is building a $ 14 million facility for use in teaching TV and film production and that each year Asbury sponsors a film festival. A ground breaking ceremony was held on Saturday. Wouldn't it be great to be a student to benefit from such a facility and program? The old library is now the student center -- very first class -- and at that center on Saturday some of the winning films from the film festival were shown. Free popcorn. These films featured Asbury students and directors. Very impressive.

I didn't get my camera out in time to get a lot of other pictures I should have taken. There will be a group picture of the Knight class that eventually will be printed -- we were all melting in the sun waiting for the photographer. It was nice to go back. Asbury has made a lot of progress since our graduation. I'm glad to see it doing so well. There are now about 1500 students at Asbury (including those in the new adult program).

I was impressed that a very large group showed up from the class of 1939 -- their 70th reunion! -- they all seemed so sweet and well preserved. Our 70th will be in 2039, so start planning now. There was only a small number from the Knight class, 1969, this year -- maybe 35. And Dr. Kinlaw didn't show up to any of the events I attended. I would liked to have said "Hello." I'm thinking I will send him a note.

Happy 4th of July! Thanks for the invite -- some day I will make it.
Posted by Mike Bock at 8:35 AM No comments: