I've done it again. Why must I relearn this lesson?

JS-Kit, alias Echo, alias Haloscan hosted comments for Alone on a Limb for more than five years. Those comments include writing that I treasure, embarrassments aplenty, trite fights over politics and language, silliness, thoughtful responses to my writing that occasionally changed my mind, reminiscences by friends old and new and a few who are now gone.

And now those comments are gone.

As far as I can tell they are gone forever. JS-Kit has taken down their website.

If anyone knows of any way I can resurrect my Haloscan/Echo comments, please let me know.
Posted by Terrell at 10:05 PM No comments:

My 2012 Predictions in the Presidential Race

Here is my best guess about how the electoral votes will turn out on Tuesday. This concedes the following losses from the votes the President received in 2008.
The Second District in Nebraska (1)
Indiana (11)
North Carolina (15)
Florida (29)

I believe the President will narrowly carry:
Virginia (13)
Colorado (9)

The President will carry these states that I believe have never really qualified as 'battlegrounds' in this election cycle:
Michigan
Pennsylvania
Minnesota

That will give the President 303 electoral votes to 235 for Mitt Romney.
[Election Eve Note: I see this is the same final prediction of Real Clear Politics and Election Projection - two conservative poll aggregators. I just spent a couple of hours making volunteer calls to voters in Florida. When the 9:30 deadline arrived I checked in on Nate Silver at fivethirtyeight and found Nate had turned Florida blue on his map. I'll take credit for that if Nate is right. 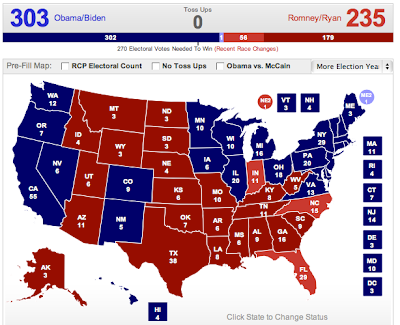 Now, I believe there is good (40% or so) chance that the President can also carry Florida. That would be great! 332 electoral votes! 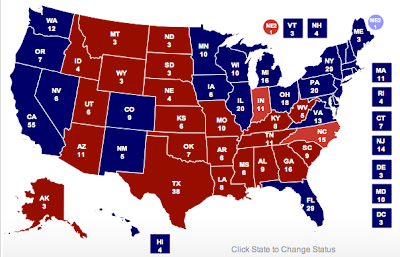 Or even North Carolina!  (25% chance maybe)  347 electoral votes. I believe this map represents the best possible result we can expect, and it would require a point or two movement of the electorate toward the President. 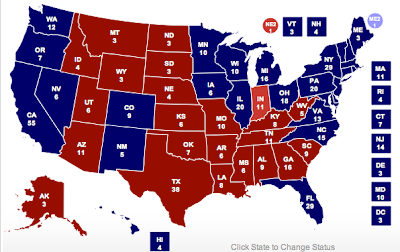 I am also old enough to remember some very disappointing election nights, and there is still the small but real possibility that we could lose this thing (15% chance) if too many voters stay home and the more energized "antis" show up, as they always do. A small percentage of stay-at-homes could give FL, NC, VA, CO, NH, IA, and/or even, though less likely, OH away. That could be tragic. Please get out and vote on Tuesday!

Four years ago my prognostications did pretty well.
Posted by Terrell at 10:26 PM No comments: 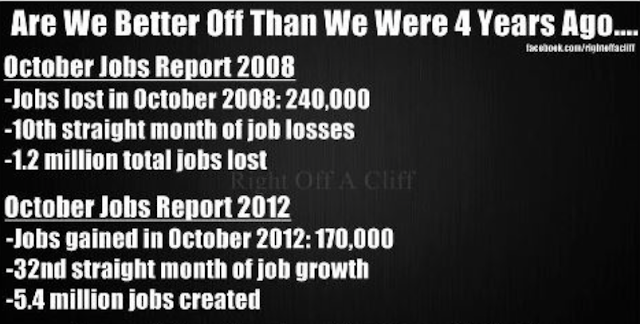 Are we better off than we were four years ago?  Yes, we are.