Riding down to visit Don

My mother and two of my sisters, Joan and Debi, rode with me to Douglasville today to visit with our cousin Don who is in the midst of a fight against complications from cancer surgery. It was a beautiful day for a ride. (Click here to read other posts about Don.)

Don, during the WSB years.
We made a pitstop at the KFC just off I-20 where I noticed this clump of misletoe in the small tree planted by the parking lot. Have you ever seen such a lush growth of this hemiparasite? 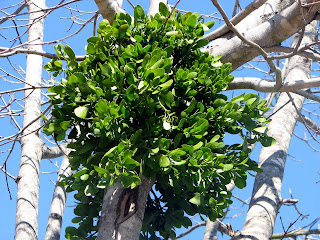 Don and Claudia live at the end of Mockingbird Lane on a gorgeous lakefront lot. They have done wonderful things with their home including a beautiful new kitchen and a sunroom overlooking the long wooded lawn that slopes down to the small lake. Don was very lucid, pain-free he said, and in good spirits.

His illness has robbed him of the magnificent radio voice that he used so ably with his fine intellect as a newsman for WSB Radio in Atlanta, NBC Radio in Cleveland, and finally with CNN Radio, back in Atlanta. But his hoarse whisper still had the life and humor of the Don we all admire and love.
Don's friendship with Louis Brown reaches back into the fifties. It was a privilege to be there when Louis and his wife, Beth, came by and to hear the two songwriters, Louis and Don reminisce. Both have had songs recorded by well-known singers. Don's "It Will Come to Pass" was recorded by Willie Nelson and by the Anita Kerr Singers. I don't think Don will mind my posting his lyrics, they are available elsewhere online.

The turning earth will raise its wand
and bring the seasons to their fruitful end
... and little men and trains will crash
and snake their way around the timeless bend
... and rivers, too, will course their way
to find the hungry Mother Sea at last
.. and love will grow, it will come to pass...

The sun will blaze its scorching path
across the sky a million times or more
... and men with charts will scan the skies
in quest of life on some forgotten shore
... and in the quiet womb the sleeping seed
will stretch its arms and grow at last
...and love will grow, it will come to pass...
(chorus/bridge) It will come to pass....

Though men and minds and times will change
still pinioned there by fears of growing old
...though scalpeled hands will plumb
the deepest corners none will find the soul...
yet bearded men in sandwich boards
will tell the sinful streets, "He's Come At Last"
.. and love will grow, it will come to pass...

(From Willie Nelson "My Own Peculiar Way" and other albums... and Anita Kerr Singers "Best of Country"Album abc/dot)

After an hour's visit Mother led us in an eloquent prayer and we headed home.

Along the way back to Rome, Joan suggested we stop at the Coots Lake Trail Head on the Silver Comet Trail and take a short walk. The Silver Comet Trail is a Rails-to-Trails project that follows an old railroad bed from Atlanta to Rockmart. It is very popular for hikers, runners, bikers, and horseback riders. The area at Coots Lake is a lovely wooded walk. I hope Sheila and I can get back to bike it one of these days. Here are some pics. 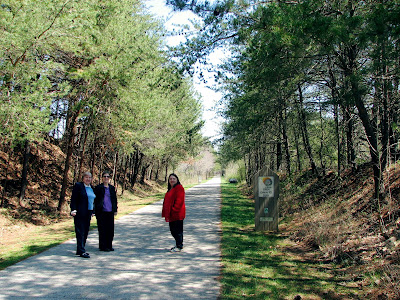 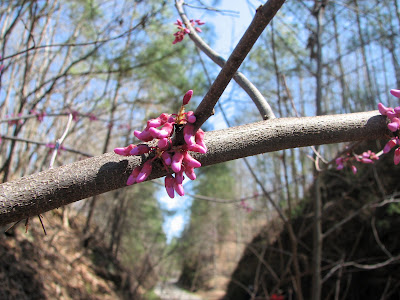 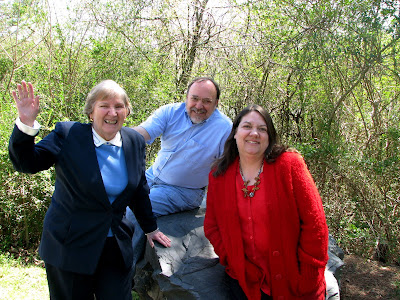 Mother, yours truly, and Debi. 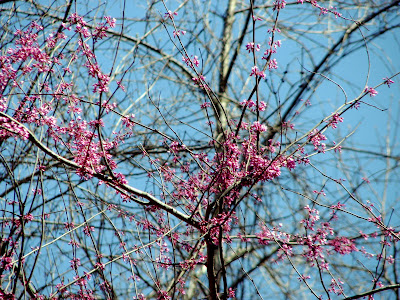