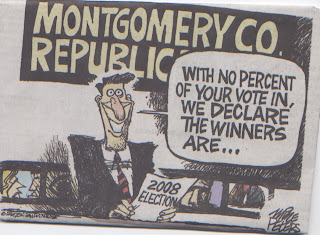 This Mike Peters cartoon popped up yesterday, accompanying a Dayton Daily News editorial entitled: "Next legislators being chosen awfully early." This cartoon is a response to the Montgomery County Republican Party's decision to make early endorsements for Republican candidates for the Ohio House of Representatives. The editorial accompanying the cartoon takes a swipe at both the Republican and the Democratic Parties.

The leadership of the Republican Party -- at both the local and state levels -- is doing everything possible to avoid primaries, on the grounds that intra-party contests sap resources from the general election. ... This will give the party leadership the opportunity to encourage the candidates who aren't endorsed to seek other, lower offices and it will discourage contributors from giving money to people who aren't going to be campaigning with the party's blessing. ...
Setting aside the timing of the party meetings, the Republicans aren't proceeding in a noticeably different way than the Democrats would. The Democrats , too, have districts that they dominate. (The are actually more dominant in them, because the Republican map-drawers have tried to concentrate Democratic voters in as few districts as possible.) And the party typically picks its own candidates and gets them nominated and elected easily.

This cartoon and editorial give light to some of the ideas in my blog, "The mission of the Democratic Party Should Be: to Make Our Representative Democracy Effective." I wrote: "Both parties believe that their mission is to win elections, and both parties, in pursuit of this mission, advance strategies that cumulatively are harmful to our democracy."
Posted by Mike Bock at 9:10 AM